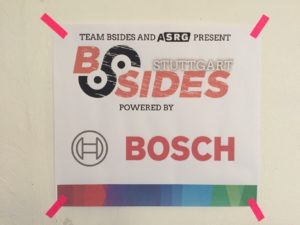 This post is a bit delayed, on the weekend, 25th and 26 of May, the first BSides Stuttgart took place in the Wizemann location. I was lucky to have been there, because after monitoring the site months and weeks before, there was no program published and no way to buy tickets. But when looking on it 2 weeks before again, it was already sold out. As this was, as you can see, a Bosch-organized event, I still managed to get listed as a guest, thanks to dear colleague from Bosch CC.

Security BSides conferences were originally a way to give those a platform whose presentations had been reject by the large conferences like DefCon or BlackHat, but in the mean time this is a grass-roots DIY conference format world-wide. And the contents are not second class in any way, in the contrary as this event has demonstrated! 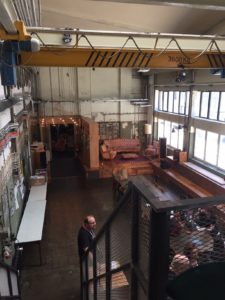 BSides Stuttgart as the first of its kind in Stuttgart in 2019 took place in the previous industrial facility Wizemann co-working space. Same place as a digitalisation hackathon form Bosch before, just smaller. Great atmosphere and well prepared by CC security people from Bosch.

Co-organized by the ASRG (Automotive Security Research Group) and being hosted in Stuttgart, the event was pretty automotive oriented in general. BUT there was a general track with interesting presentations on cyber security in general. As you can image, this was the track I’ve been mostly following.

Many colleagues from Bosch PSIRT and CERT and other (automotive) Bosch GBs attended the conference together with people from other companies such as Daimler.

These are the topics I had attended and are noteworthy on day 1:

On the second day, the sunny Sunday, I’ve been listening to the following presentations:

I’ve learned so many new tools, and new information especially in the areas of network security and security monitoring for getting OpSec started.

What’s pretty sure is that BSides Stuttgart will continue next year, maybe growing and giving also you a chance to grep a seat. I’s cool that we finally have a cheap and open security conference right here in Stuttgart, thanks to the organizers from Bosch for the great event! See you there next year, mark your calendar already for May 14 -16 2020!