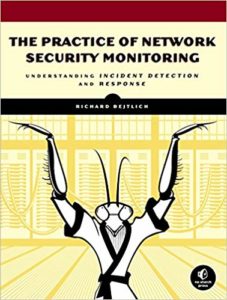 The second book from Richard Bejtlich in short time: “The Practice of Network Security Monitoring” has been read. This one is a bit newer, though not totally up to date, from 2014. The practical part of the book is based on the Security Onion (SO) distribution. Unfortunately a lot has happened with SO in the mean time. The book is still based on ELSA as part of SO, which has been swapped with the Elastic stack in the meantime. So the installation part could be skipped, also due to the fact, that I have already several times performed a SO installation at home.

Just as with the TAO of network security monitoring book a lot of space is dedicated to various, in the mean time, well-known sniffing tools such as Wireshark, Bro, Argus, Sguil, Squert, Snorby etc. Nevertheless in the last third these tools are used for various real-life scenarios such as binary extraction with Bro, detecting server- and client-side intrusions, that were especially helpful.

Security Onion is definitively the first choice for a real NSM with Sguil as real-time NSM console. For a home NSM a more historic Elastic stack-based NSM will probably be more useful, as I will not constantly monitor a NSM console all day long :-). The problem is a bit that SO is a big system, unfortunately a bit too heavy for the old laptop that I can dedicate to the NSM server part at the moment. Therefore I switched to SELKS, also a NSM distribution from Status Networks, also based on Elastic stack but a bit more light-weight. ELSA, based on syslog-ng doesn’t fit well anymore when you would like to use filebeat/packetbeat as logfile shipper. 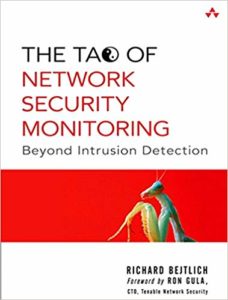 Wow, that was a thick book, the Tao of Network Security Monitoring, beyond intrusion detection from the guru of NSM, Richard Bejtlich. This book is considered the bible of NSM. The book is from 2004 and thus a bit out of date, especially as it is filled with tons and tons of tool, one will find that some of these do not yet exist anymore or development has stopped years ago. But the intention of the book is not to serve as a tool reference but to show which tools are available and what they can be used for. So the brain needs to translate the samples to what tools we have today available. And anyhow in each category we still have enough candidates.

The story line of the book is basically along the different types of network security monitoring data that one can capture along with the tools that provide it:

Bejtlich explains the use of these types of data and the corresponding tools using real-life samples of attacks. This is cool, although following the packet dumps without in-depth protocol knowledge of IP, UDP, TCP, DNS etc. is really a bit hard. Luckily he explains it after the printed dump, so one can be a bit lazy. Probably that is not a good idea, as one missing some learning, but that would probably require a second round of reading.

But the real learning from this book is understanding what a well-configured NSM system and especially stored session data can really give you to detect all kinds of attacks, if you just watch closely enough. The interesting question for me still to answer is how can I transfer this knowledge to cloud-based NSM, where we have some packet capture abilities but all the rest of the tools, how to make use of them in such an environment is left as an exercise.

Summary: definitively worth a read, although it could get an update once a while. 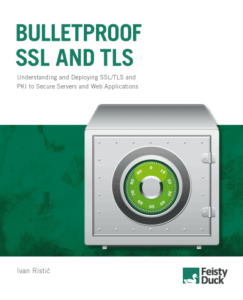 As I’m currently involved with lots of openssl automation at work, I bought the book “Bulletproof SSL and TLS” from Ivan Ristić. See the book’s site at https://www.feistyduck.com/books/bulletproof-ssl-and-tls/. Attention, it looks like on Amazon there is only the 2014 edition available, while on Ivan’s blog (https://blog.ivanristic.com/2017/07/announcing-bulletproof-ssl-and-tls-2017-revision.html), which I found out after the purchase of course, there is a 2017 version mentioned. Nevertheless that the book edition I read was a bit dated, I learned a lot, despite having been engaged with openssl before.

It is a difference being able to generate and sign some certificates and knowing the history, the vulnerabilities and mechanisms of the protocol itself. This book is definitively the “bible” of TLS from the founder of the (Qualys) SSL Labs with the famous SSL server test tool (btw. also available as standalone tool: ssllabs-scan on github). So there is quite some expertise and mastership behind this book.

What can one learn from the book? Well first a thorough basis and the insight, or maybe reminder, that TLS is not just encryption but also certificate-based authentication and provides integrity and session management. So it’s a bundle of security functionality that can be used not only for HTTPS but also any other protocol that you can run over TCP. There are many articles about TLS port forwarding, but with the book, I have finally gotten the differences.

There is by the way also a github repository to the book that contains among other resources configuration files for setting up a own root CA for self-signed certificates. That being a task that I’m just involved in and this thus very handy to verify my configuration taken from other sources in the web. Clearly for public customer or browser-facing endpoints one will always have to use purchased certificates from a public CA. But in the innards of a system, behind a reverse proxy or from the application backend to a infrastructure service, such as RabbitMQ or a DB, self-signed certificates, well-configured, serve well their purpose. And you save money and have the full control over expiration time and what not.

Especially interesting for were the details on OSCP and OSCP stapling and all the other initiatives that there are. Certainly a topic that one would like to explore at work for getting an additional grain of security into especially cloud-hosted services. Another concept that was covered were the different ways of pinning and what it really means. It is not so a sophisticated concept that nobody uses, anyhow.

What I found especially helpful were, beyond some openssl command-line examples also a in-depth chapter on configuring Nginx with TLS, something that I happen to just do at the moment at work, too. What a coincidence. That adds well to the Nginx TLS documentation, which is more reference than tutorial. Especially the securing of a down-stream connection to backend services in a reverse proxy scenario.

Well, this is thick book and it took a while to get through but it was worth it and I’m now feeling much better prepared for practical work with TLS, openssl and juggling with certificates.