Modsecurity (from SpiderLabs) is probably the best known open-source web application firewall (WAF) originally (and still is) a module from the Apache web server. But in the mean time it is also available as module for Nginx (nginx-modsecurity) and IIS and other integrations. I came into contact with modsecurity in the context with Nginx.

The second important project in conjunction with modsecurity is the OWASP core rule set (CRS) a set of modsecurity rules for a WAF. You meet these two in many unexpected places, e.g. the Azure application gateway is based on Nginx with the CRS. Or the Kubernetes ingress controller is an Nginx with CRS and modsecurity WAF module included. 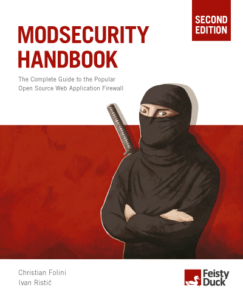 This is why I recently bought the book “Modsecurity Handbook” from Feisty Duck and the authors Christian Felini and Ivan Ristić (see https://www.feistyduck.com/books/modsecurity-handbook/).

This is really “THE” book on modsecurity from its authors, the bible to to say and goes into the depth of writing rules youself. It is not an explanation of the CRS, for this there no books, you have to read the rules in the github repository. This book does prepare you to do this, something that look daunting at first when you ever looked at the CRS ruleset without preparation.

That is probably one of the most important learnings one gets from the book, because I don’t know yet, whether I will write my own modsecurity rulesets myself. Although the second interesting insight were the use cases that you could cover with a WAF. The book has a long chapter on this topic and delves into detailed implementation ideas on use cases such as

The idea that nginx logs are an important source for security and audit logs for a SIEM is certainly not surprising. But being able to actively detect during runtime certain vulnerabilities and constantly reporting them as security alert is interesting. Think about missing security headers or wrongly configured content security policies (CSP) in HTTP. Instead of detecting it during vulnerability assessments or penetration tests, such inspection can happen during operations and thus provide a 100% coverage of all operations.

Also having a tool to quickly mitigate a vulnerability before the development team can come up with a fix and new release for a backend sounds interesting. You can even inject content into a response, e.g. Javascript. I just have some doubts about the complexity to introduce new rules and such mitigations quickly in environments where modsecurity and CRS are realistically found these days, such as Kubernetes ingress or WAF. An Azure application gateway for example does not expose the full functionality of modsecurity directly but hides most juwels under some own configuration portal.

At the end the book contains an extensive reference part with explanation of all the directives, variables, operators and actions of the modsecurity rule language. This way the book serves well when you need to actually develop rules in practice beyond what the Internet provides as reference resources.

Creating your own rulesets has its quite hard complexities in my opinion, but it is a tool in your defensive toolset. At least using the CRS with a WAF out-of-the box with just slight tuning, such as disabling rules that produce false positive or unneeded rulesets should be possible. That is anyhow the only thing that environments such as Azure application gateway allow you to do. Going beyond that needs a good reason. The disadvantage is really that such configuration is decoupled from the protected service or application and if we can fix a vulnerability there quickly it certainly is the preferable option before we turn to using custom modsecurity rules. In times of continuous deployment that should be fast enough to avoid dynamic patching. For old applications where there is no team anymore maintaining security or that has half-year release cycles this is still a valid option in the security control portfolio.

I’m curious if I will finally use it one time or not.